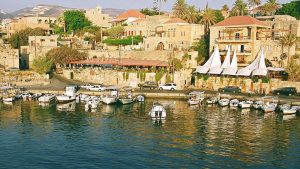 Byblos is a Middle Eastern city on Levant coast in the Mount Lebanon Governorate, Lebanon. Byblos is re-emerging as an upscale touristic hub. With its ancient port, Phoenician, Roman, and Crusader ruins, sandy beaches and the picturesque mountains that surround it make it an ideal tourist destination. The city is known for its fish restaurants, open-air bars, and outdoor cafes. Yachts cruise into its harbor today as they did in the 1960s and 1970s when Marlon Brando and Frank Sinatra were regular visitors to the city. Byblos was crowned as the “Arab Tour Capital” for the year 2016 by the Lebanese minister of tourism in the Grand Serail in Beirut. Byblos was chosen by Condé Nast Traveler as the second best city in the Middle East for 2012, beating Tel Aviv and Dubai, and by the World Tourism Organization as the best Arab tourist city for 2013.

Food is never more glorious than when it comes from the Middle East. The cuisine typically contain exotic herbs, spices and cheeses. Spices and herbs are used in dishes and are often strongly flavored with cumin, caraway, nutmeg, turmeric, mint, parsley and others.

The most important part of this cuisine consists of olives, chickpeas, lentils, beans, and vegetables. Hence, Turkish & Mediterranean mezzas such as Hummus, Tabbouleh, Falafel and Kibbeh are made from these ingredients. Meat such as chicken, beef or lamb are often skewered and grilled as kebabs, served along with yogurt, cheeses and legumes to make up the rest of the protein content of the diet.

Pita bread, which is widely known to be the oldest type of bread, is commonly served along many dishes. It is often to wrap or pick up food with. Desserts such as baklava, kunafeh and rice pudding are popular among Middle Easterners with sweet tooth.

Inspired by his cross-cultural culinary adventures, Chef Mohamad creates his own special recipes to provide you the best authentic Turkish & Mediterranean dining experience in Singapore. His signature dishes includes Byblos Mixed Grilled, Lamb Kofta and Byblos Beef Steak – definitely a taste you can only find in Byblos.